‘All these died in faith, before receiving any of the things that had been promised, but they saw them in the far distance and welcomed them, recognising that they were only strangers and pilgrims on earth’ (Hebrews 11: 13)

The irrepressible John Winton of the Churches Tourism Network Wales, having virtually invented church tourism for our nation, is launching his Faith Tourism Action Plan in St Asaph. Here are some amazing statistics. Churches are among our most popular tourist attractions – St David’s Cathedral gets 262,000 visitors a year and Brecon gets 120,000. Their motivations vary – they may be interested in old buildings, tracing their family connections or simply looking for somewhere free to get out of the rain. But on the international scene, faith tourism is big business. Pilgrimage to Compostela has a huge impact on the economy of northern Spain. Pilgrims making the hajj to Mecca contribute about $8 billion a year to the Saudi Arabian economy. It’s no wonder that VisitWales is keen to encourage John’s plans.

Part of this, of course, is the Galilee Project (http://www.illtudsgalileechapel.org.uk/) . Initially conceived as a way of providing a better display space for the early medieval carved stones at St Illtud’s Church, this is spiralling out with an ambitious plan for a pilgrimage route across south Wales, linking Llandaff, St Fagan’s (where the museum will be the new home of the collection of early medieval stones now in the National Museum in Cathays Park in Cardiff), Llancarfan (another early monastic site with some impressive late medieval wall paintings), Llanilltud itself, Merthyr Mawr and Laleston, and Margam.

Part of the aim is to get rid of the unfortunate Anglicisation of the church’s name, Llantwit (St Twit – who he?) and re-popularise the Welsh version, Llanilltud. Seriously, we have deferred for too long to the English inability to pronounce our place names – they are part of the intangible charm of our heritage and we need to stop hiding them.

So John, Gareth Kiddie (the project’s business consultant) and I sat down with the maps to think about possible routes. Like most heritage footpath plans, this one is a balancing act: we need a good walk, on open and clear footpaths, that visits key sites and pushes the buttons of the potential funders.

John seems to treat me as a sort of enquire within upon everything to do with church history. Sometimes this means that he calls me in for things that I know nothing about: but when it comes to pilgrimage and footpaths I am on home turf. The biggest problem seemed to be the start. Llandaff Cathedral is in the middle of a built-up area. Who will want to walk for miles along busy roads before reaching the countryside? But Cardiff is famous for its ‘green lungs’, corridors of woodland and open space between the housing estates; and one of the biggest of these runs along the river. We might have to go north in order to go south … but north from Llandaff is the traditional pilgrimage route to Penrhys, one I’ve walked in the past as an alternative to our usual route from Llantarnam.

So it was that I put my boots on and collected Cara the pilgrim dog, and we made our way to the Taff bridge between the cathedral and Llandaff North. 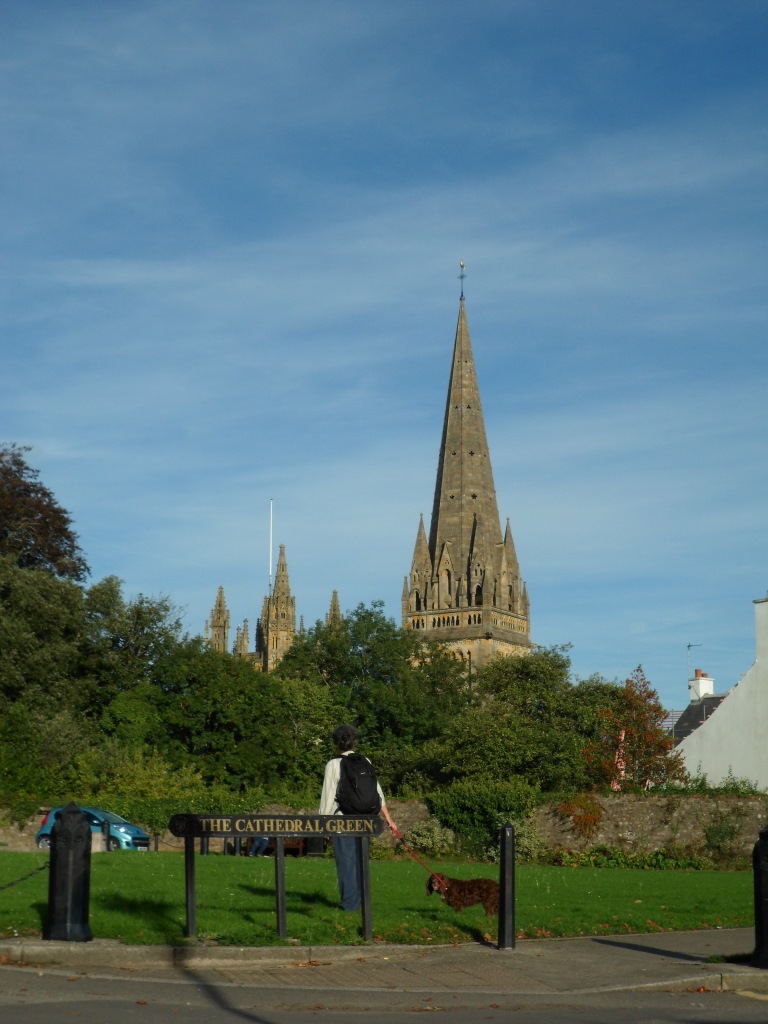 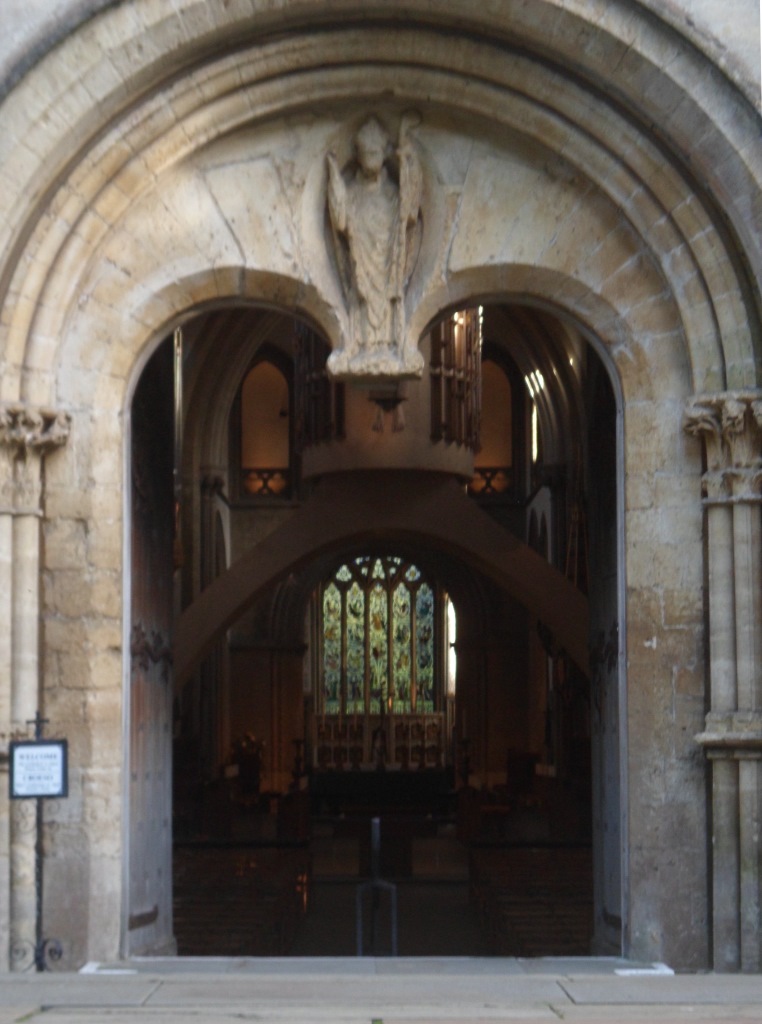 The route up river from Llandaff starts well – you walk up the river bank from the cathedral, climb to the road for a few metres past the boat club then back to the river bank as far as the bridge. Keep on the west bank of the Taff and walk along Radyr Court Road, then when the road bears up to the left take the path along the river bank. Turn left under the railway line and walk up to the path through Radyr Woods then turn left past the playing fields of Radyr Comp to emerge at the roundabout where the Radyr road meets the Llantrisant Road.

Here it gets problematic. The footpath across the fields goes through the farmyard of Maes-y-llech – never a good idea. I had a nice chat with the farmer (he knows my cousins from the Vale). He admits he doesn’t like footpaths through his farm but accepts that it’s legal – but for a promoted path it might be better to re-route it. But here’s the real problem – he eventually said that the whole farm is scheduled for building under the latest local development plan. This explained some of his bitterness – his family have farmed there for generations but as tenants so the farm will be sold and they will be out on their ears. It’s dreadful for him, but it also means there isn’t much point in putting a lot of thought into a route that’s going to go round the back lanes of a housing development.

But there is an alternative. The footpath from Maes-y-llech cuts across the line of the disused railway from Fairwater to Llantrisant. After that, the footpath is clear up to the Pentrebane road. You have about 400m. on the road then there is a footpath across the field to a green lane that gets you into the new housing in St Fagans and the back gate of the Museum. So I walked back along the railway line. 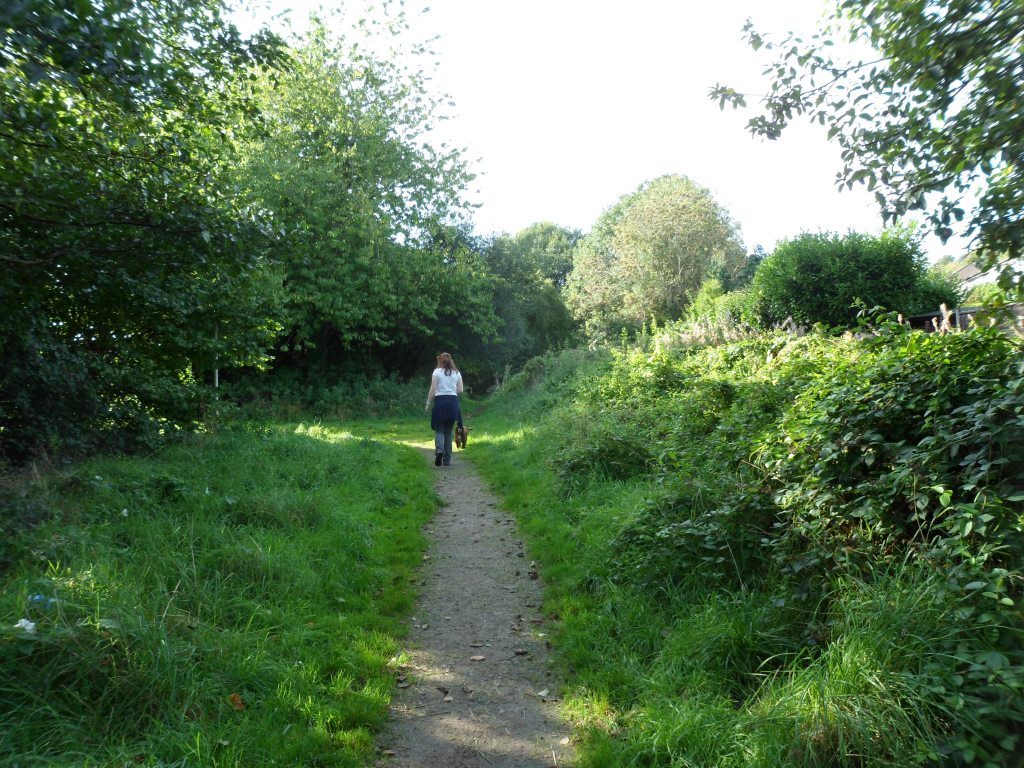 It needs a bit of attention 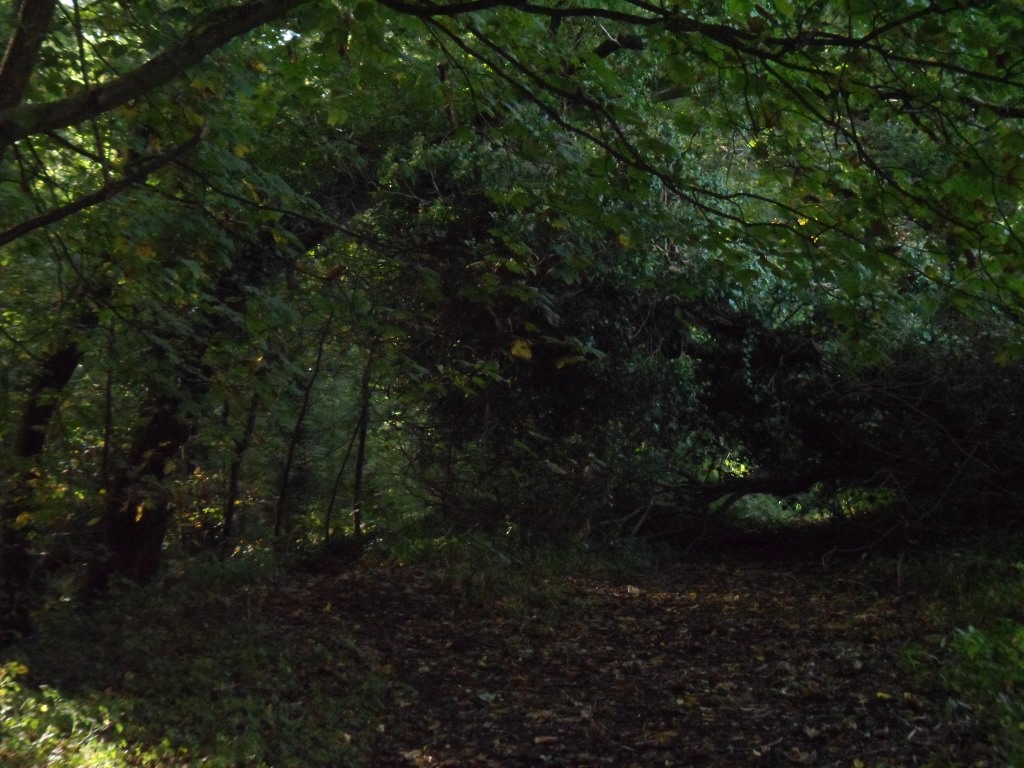 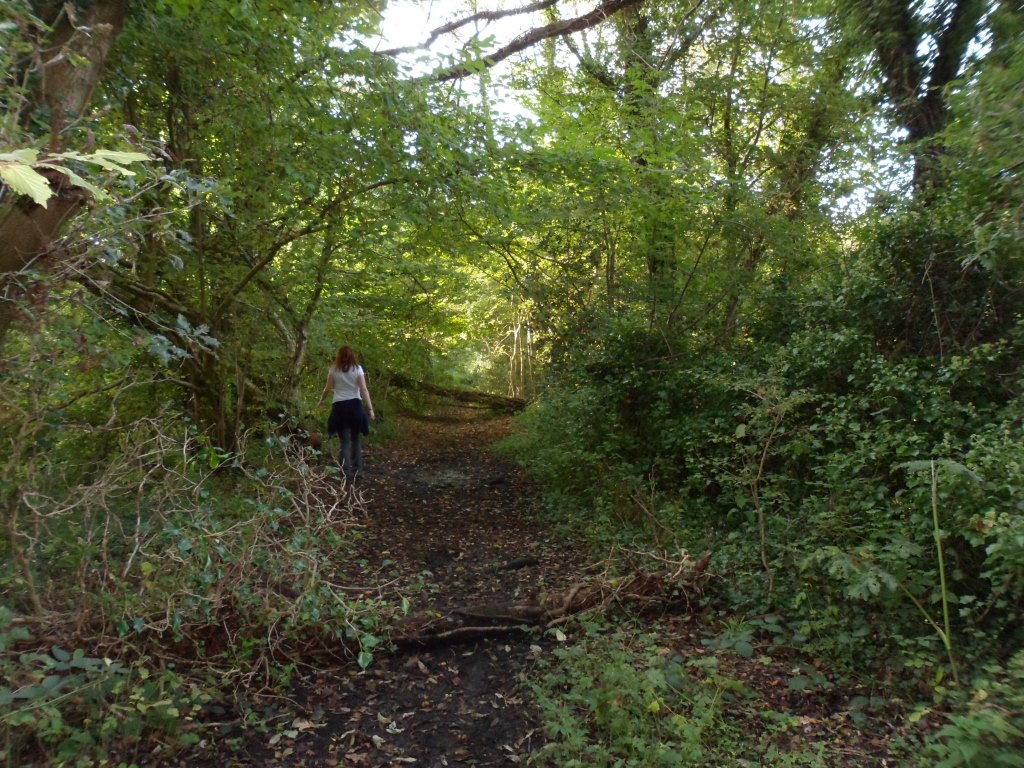 (fallen trees, and one bridge has been demolished: there’s an easy scramble down the embankment and back up) and it isn’t actually a right of way but it has a waymark post for a promoted route half way along 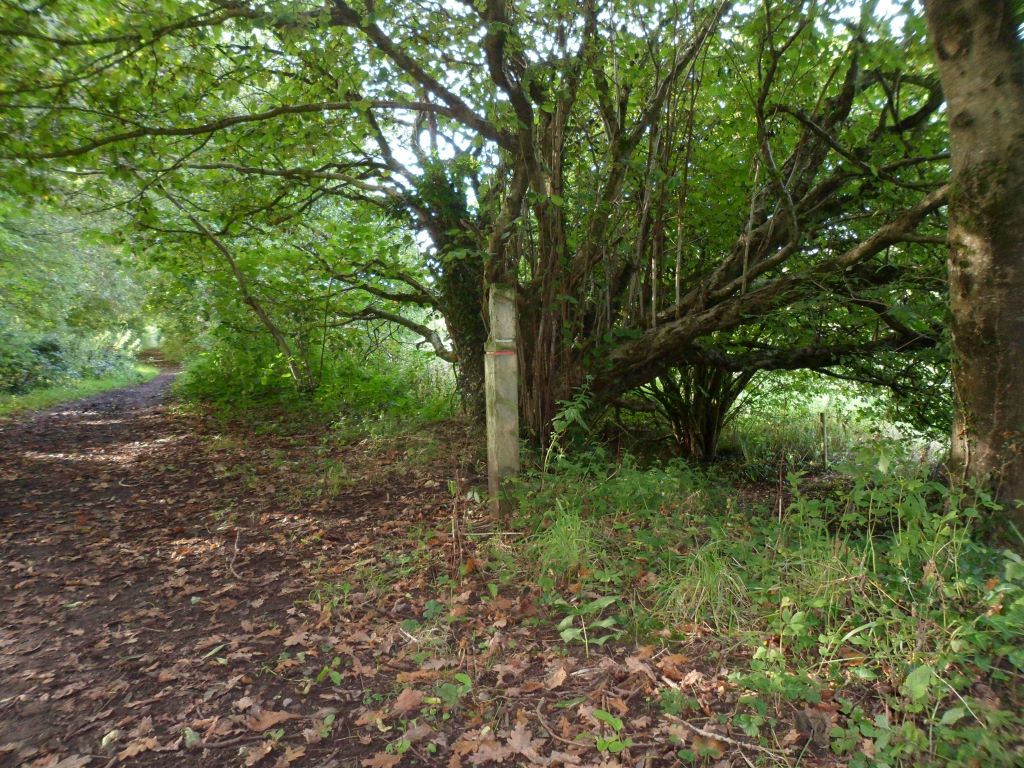 and it gets you by a very pleasant route into the southern part of Danescourt. I re-walked it with my daughter Rachel and she approved.

So the suggested route is as follows: from the cathedral up the river to the bridge. About 100 m. along Radyr Court Road, go up the steps to your left. Walk along Highfields, turn down Greenwood Road, left along the Llantrisant Road to the roundabout. Down Tangmere Drive, along Grantham Close and into the park, bear right and you are on the old railway line. Follow this for about 1/2 mile until you are out of the trees, then after the pylon turn left and follow the footpath across the fields to the Pentrebane road and down the green lane to St Fagans.

Keen pilgrims would probably want to make a bit of a loop to the north to go past Radyr Court and St John’s Church. St John’s is the old parish church of Radyr, a simple building of rough stone with a huge old yew tree.  Radyr Court is now a pub but it was in the Middle Ages the home of the Mathew family. The women of the family were famous for looking after pilgrims on their way to Penrhys. According to the elegy written by Rhisiart ap Rhys to Elspeth Mathew,

‘her parlour was to many invalids like a hostelry’. He also said that she sent a considerable weight of candles to Penrhys, but she never seems to have gone there herself. Perhaps she considered herself to have taken informal vows at Radyr and to be running a sort of maison Dieu, a hospice for pilgrims. This would make her something like Sister Anne Larkins, who runs the retreat house at Llantarnam and sets us off on our annual pilgrimage from Llantarnam to Penrhys with a blessing of water from a medieval stoup found in the abbey ruins.

The family also claimed to be hereditary custodians of the skull of St Teilo. This famous relic was recently returned to the cathedral after some time in Australia. It is still shown occasionally to visitors and would probably be brought out for an organised group. The cathedral also has the effigy tombs of David Mathew, Sir William Mathew and his wife Jenet 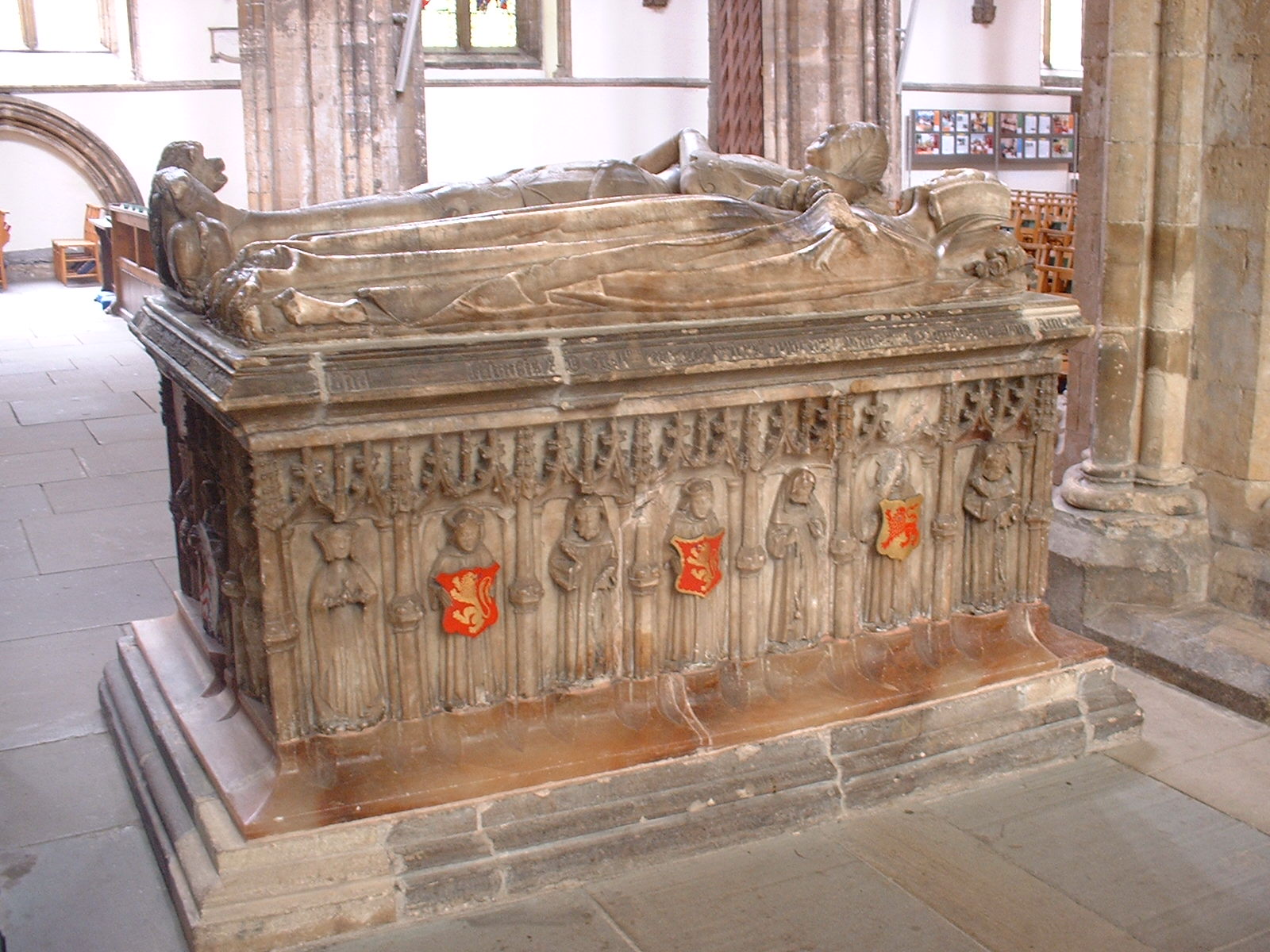 with the famous ‘sleeping bedesman’.

So there are a lot of connections.