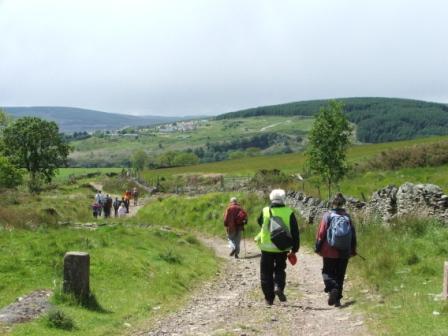 When I was an undergraduate, way back when, we played board games like Risk, sometimes all night. We still have the odd game of Monopoly at Christmas, but I hadn’t realised that board games were a Thing until my daughter told me that was what they did on holiday – and I found that my son-in-law actually helps lead a board gaming group.

So I said ‘Who’d have thought it?’ and moved on.

Then last autumn with my lovely colleague Maria Nita I was invited to Swansea Museum to talk about pilgrimage at an open day, part of the National Museum’s ‘Saving Treasures – Telling Stories’ project. This does what it says – telling the stories behind some of the little objects handed in as part of the Portable Antiquities scheme. Some of the finds in Swansea Bay were pilgrim badges and they wanted to know more about them. This led to more events involving Museum volunteers, women’s groups from Gower and the lovely lads from the Gurnos Men’s Support Group. We walked them along our pilgrimage route to Penrhys and they went mudlarking in Swansea Bay.

And the Museum came up with the idea of a board game. I think they were thinking of a fairly simple children’s game – fall in the river, throw a double to get out, find a good hostel, get a second go, and so on. But I took to wondering about a grown-up game as well. You could choose an avatar (Margery Kempe, anyone?), collect the kit, choose your route, have all sorts of decisions to make on the way.  My son-in-law suggested we look at a game called Tokaido because it was one of the earliest journeying board games. A couple of colleagues said they were interested – one is a member of a board gaming group in Cardiff.

Then it all fizzled out.

Until this week when there was something on Twitter about the Reformation board game https://boardgamegeek.com/boardgame/200834/sola-fide-reformation – see thread at https://twitter.com/heritagepilgrim/status/904452513730101248 – and I replied that I had thought about designing a board game on pilgrimage. There was a surprising amount of enthusiasm. Here’s a suggestion for the board https://twitter.com/nickswarb/status/904841167925387264 and a lot of ideas about detail. History of Religious Women (@H_WRBI  ) wanted ‘rivalry between Jesuits &bishop, please? Need to bet on which shrine you should work towards, with SJ/Bp conflict in background’. I explained that being a medievalist I’d been thinking of something medieval . @H_WRBI said fine, bishop and Dominicans, we could do the post-Ref version as extension.

Now, I know next to nothing about designing board games – and even less about online games, which I think this one might have to be. But it does seem like a fun idea. You could choose a character – one of Chaucer’s pilgrims, maybe? You could start by collecting the standard kit – hat, scrip, boots, staff – and getting it blessed by the bishop. You could have the option of other kit, either to help on the journey or to get extra points (take along a relic to be blessed, a reliquary to collect something at the shrine, carry a heavy cross so you are slower on the journey etc). You could choose a destination – further afield gets more points but you are more likely to lose. We do actually have a framework for this: Pope Callixtus, bless him, decreed that 2 journeys to St David’s in west Wales were the equivalent of one to Rome, and three were the equivalent of one to the Holy Land. (This was a particularly good deal if you lived in Swansea, I seem to remember saying.) You could get extra points for going to other shrines on the way – again, we have evidence for this, guide books to the route to Compostela mention other places you could visit en route. There are all the things that could happen to you on the way – again, the Compostela guide books mention plagues of flies and wasps, poisoned rivers, boatmen who tip you in the river.

I’m just putting this blog post out there – do reply with ideas, and if anyone is good at designing board games or online equivalents, we can all get in touch.