To distract us during the lockdown, while we can’t do much in the way of fieldwork, we’ve been having a discussion on Twitter on the mapping and listing of deserted settlements. @DrFrancisYoung asked if anyone had ever done an atlas of all England’s deserted villages – so I said ‘and the Welsh ones’. It was suggested that Wales needed a separate volume – fair enough, there are differences, different settlement patterns, much more dispersed settlement, hamlets rather than villages. Also the perennial problems of funding and getting it noticed. Then @A_N_Coward rather proved my point by pointing out that our online resource Coflein ‘has site types for ‘deserted settlement’ and ‘deserted rural settlement’ with about 400 sites between them (although there’s probably some overlap) and a nice distribution across Wales. Many have pics (mostly aerial photos): https://coflein.gov.uk/en/site/search/result?PCLASSSUB=97280&SEARCH_MODE=COMPLEX_SEARCH&view=map https://coflein.gov.uk/en/site/search/result?PCLASSSUB=500312&SEARCH_MODE=COMPLEX_SEARCH&view=map ‘

so actually we seem to have done it. Mind you, there’s some debate about what constitutes a settlement – how many cottages?

Meanwhile, my walks with my neighbour’s dog had taken me over towards the Wenallt, just north of Cardiff, and the little valley of the Nant Cwmnofydd: and at about grid ref ST 14702 83939 what should I find but what looked like the ruins of a row of cottages. 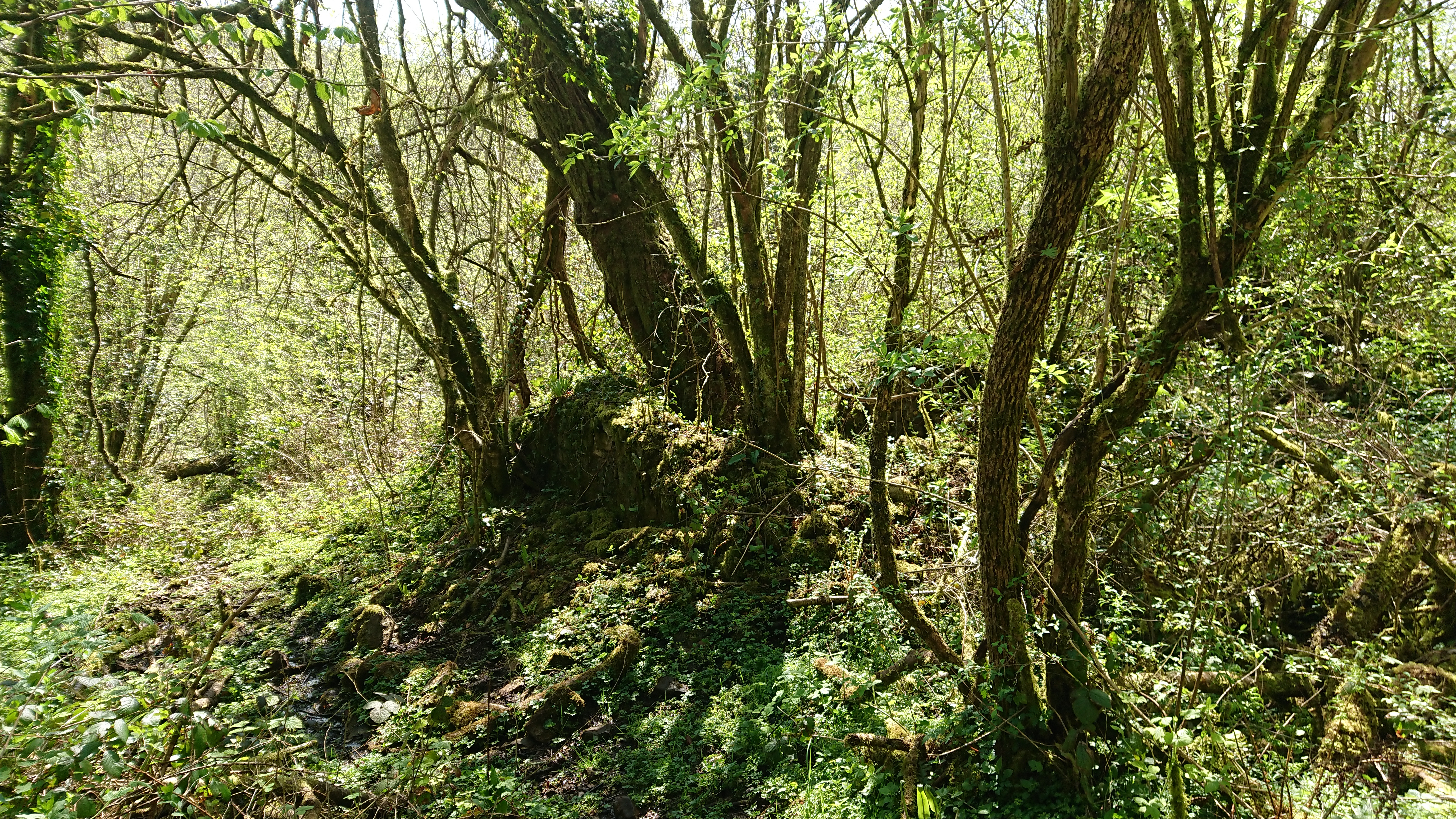 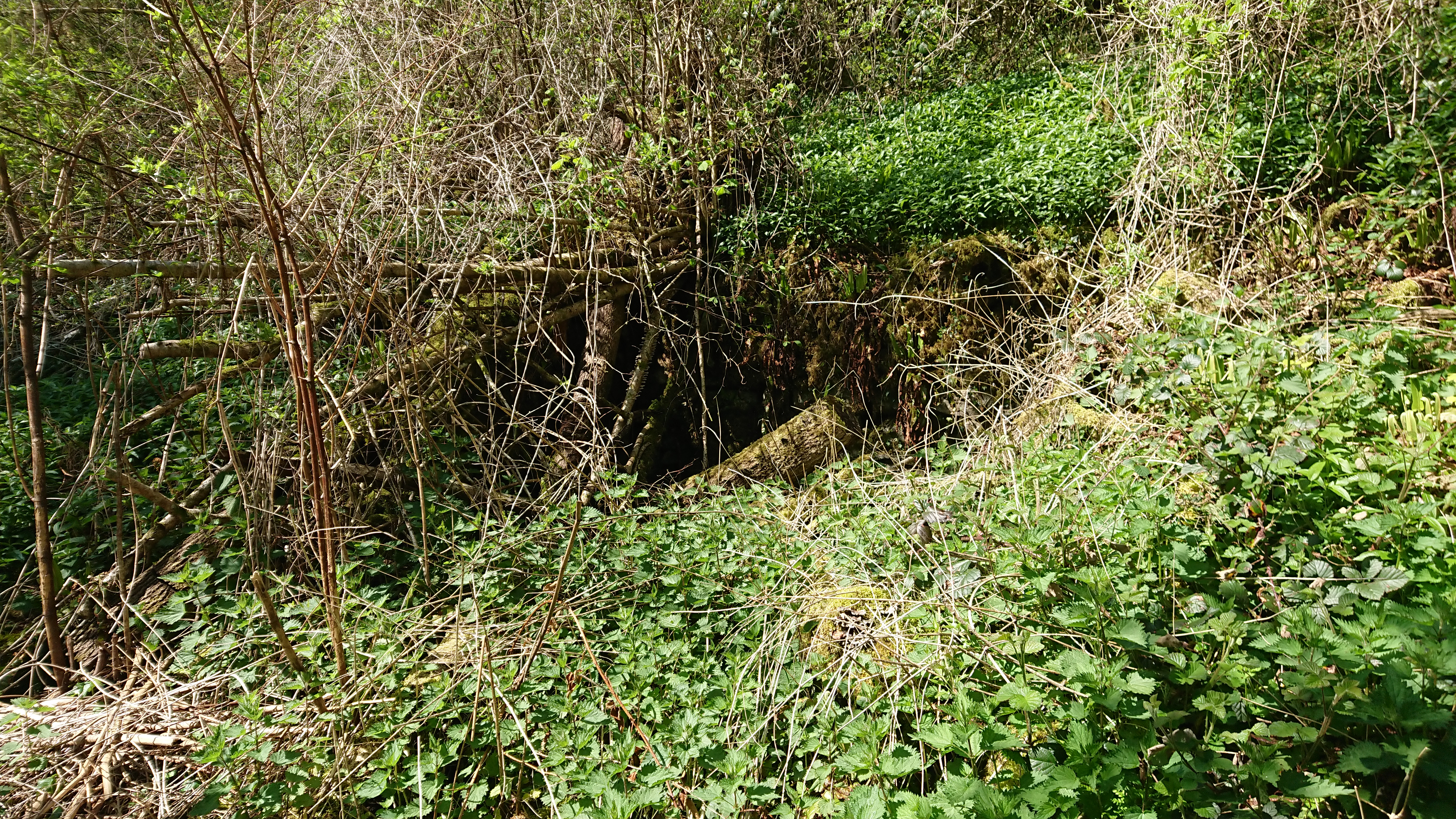 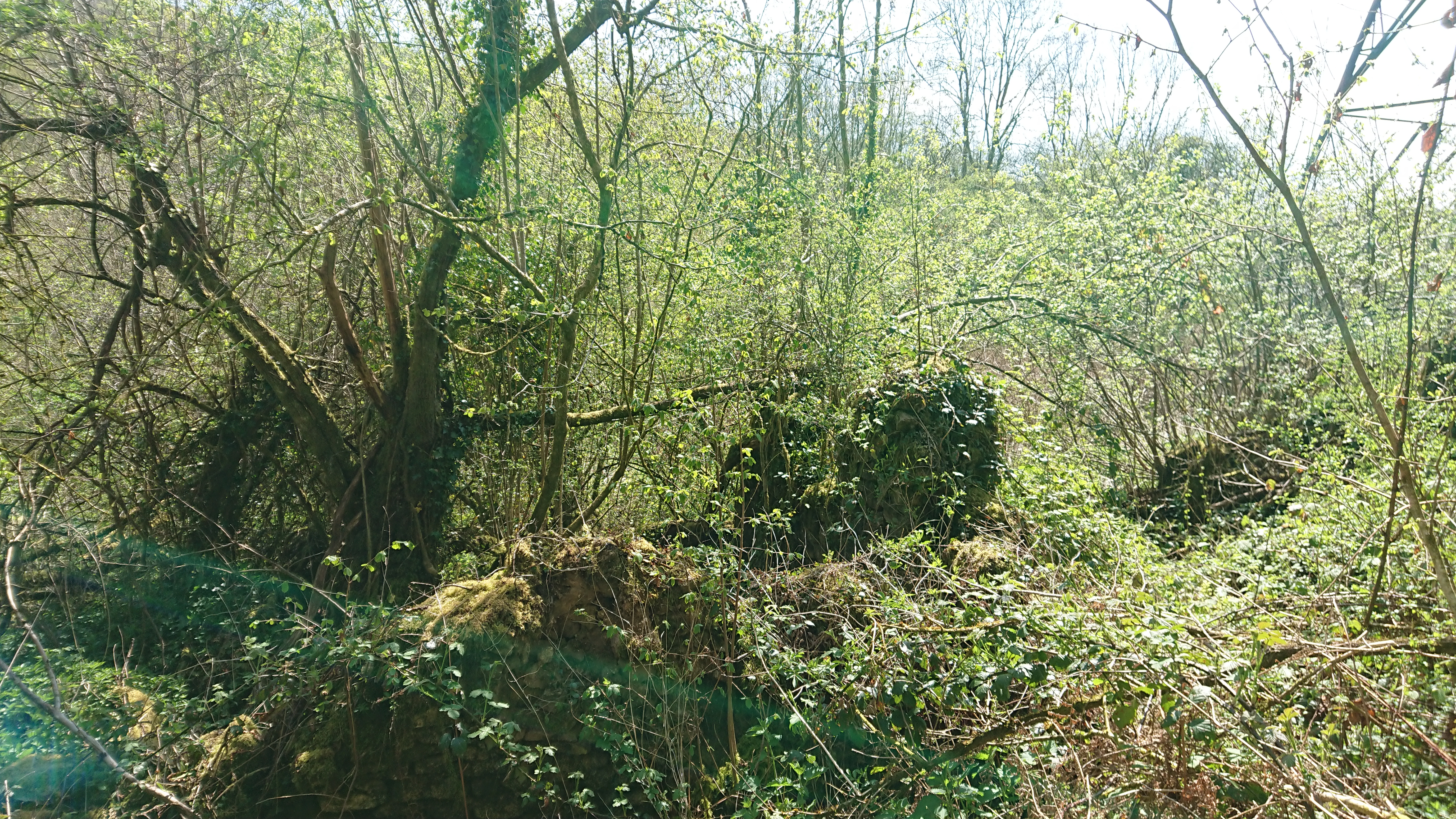 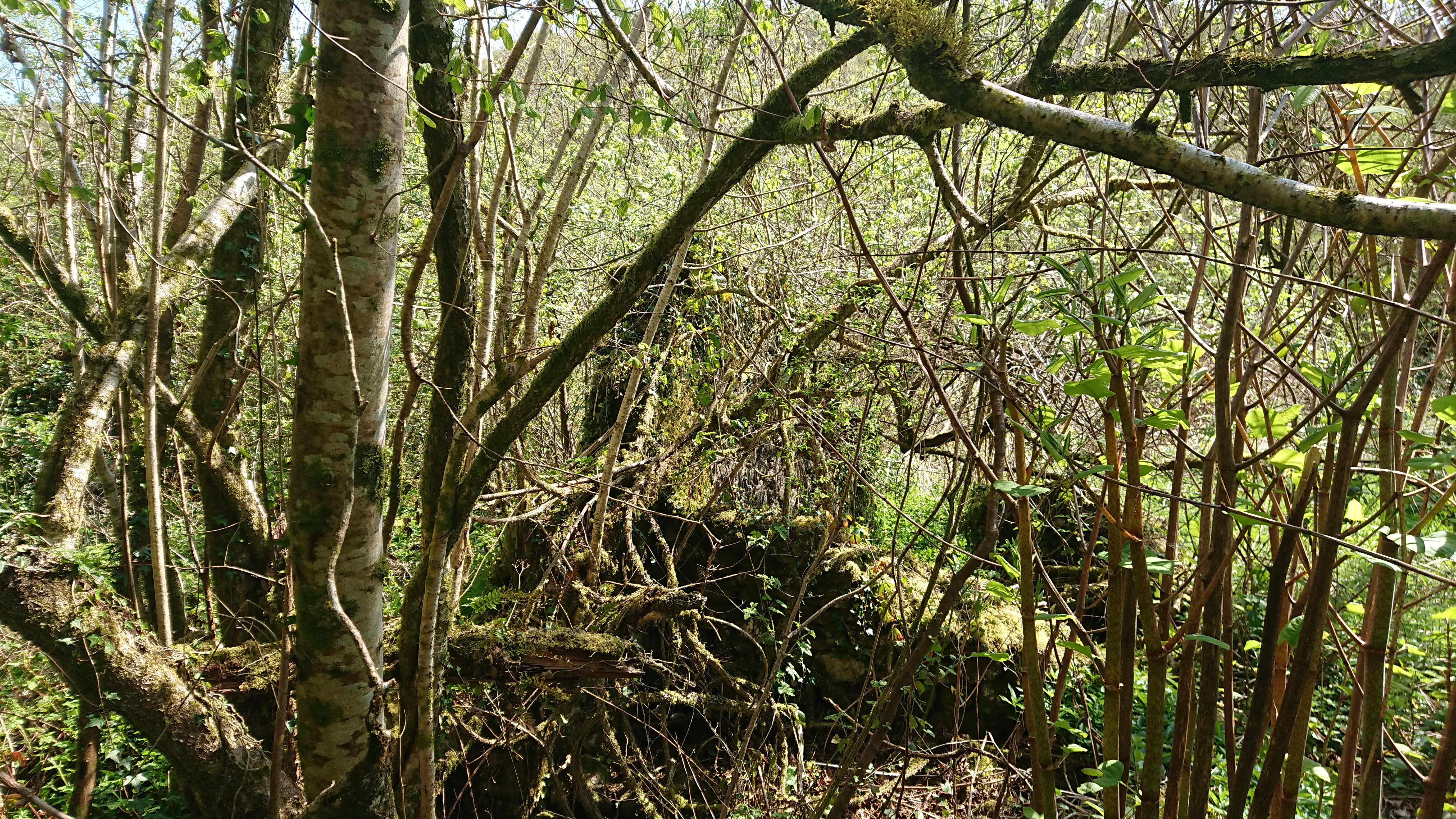 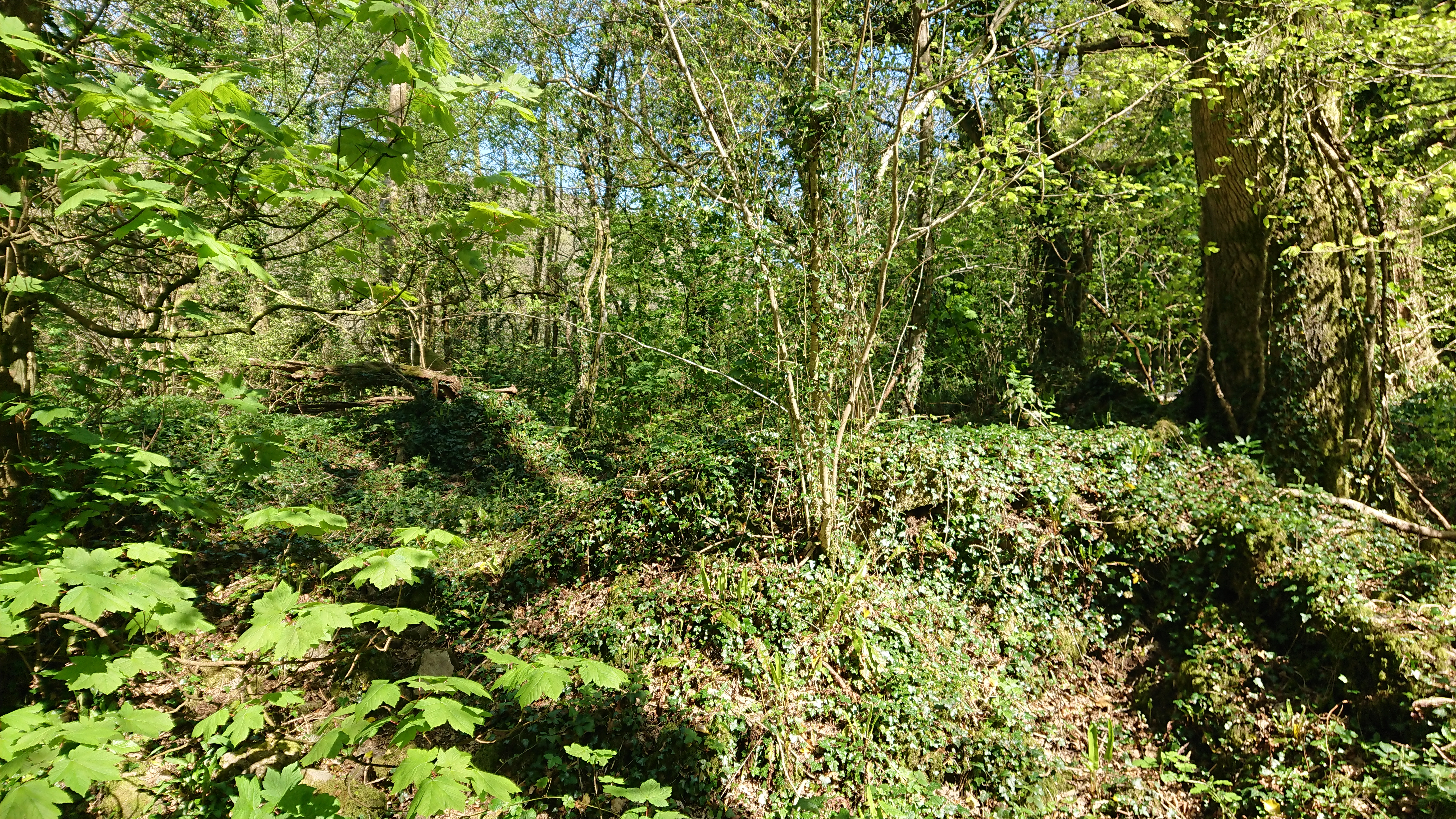 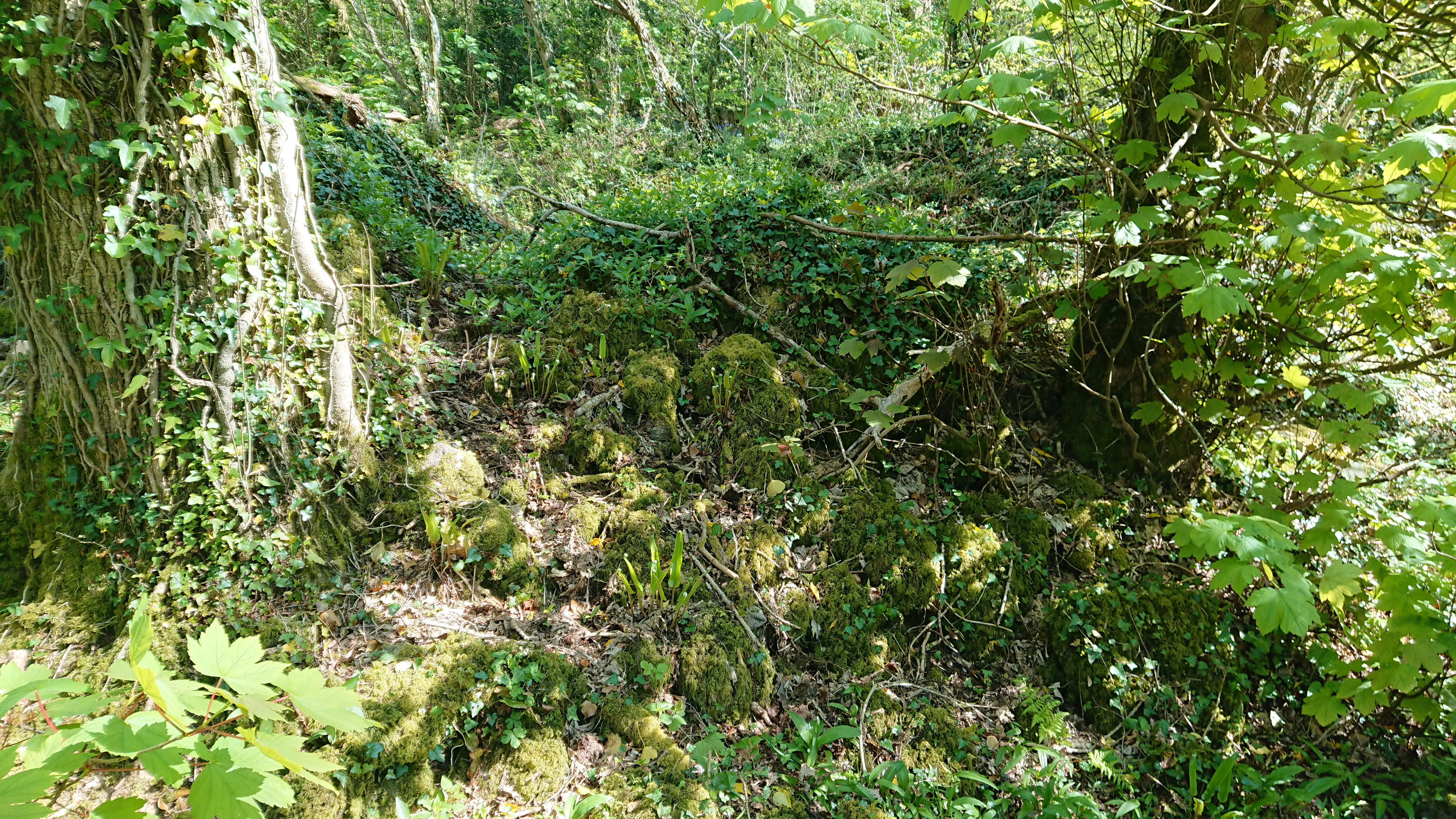 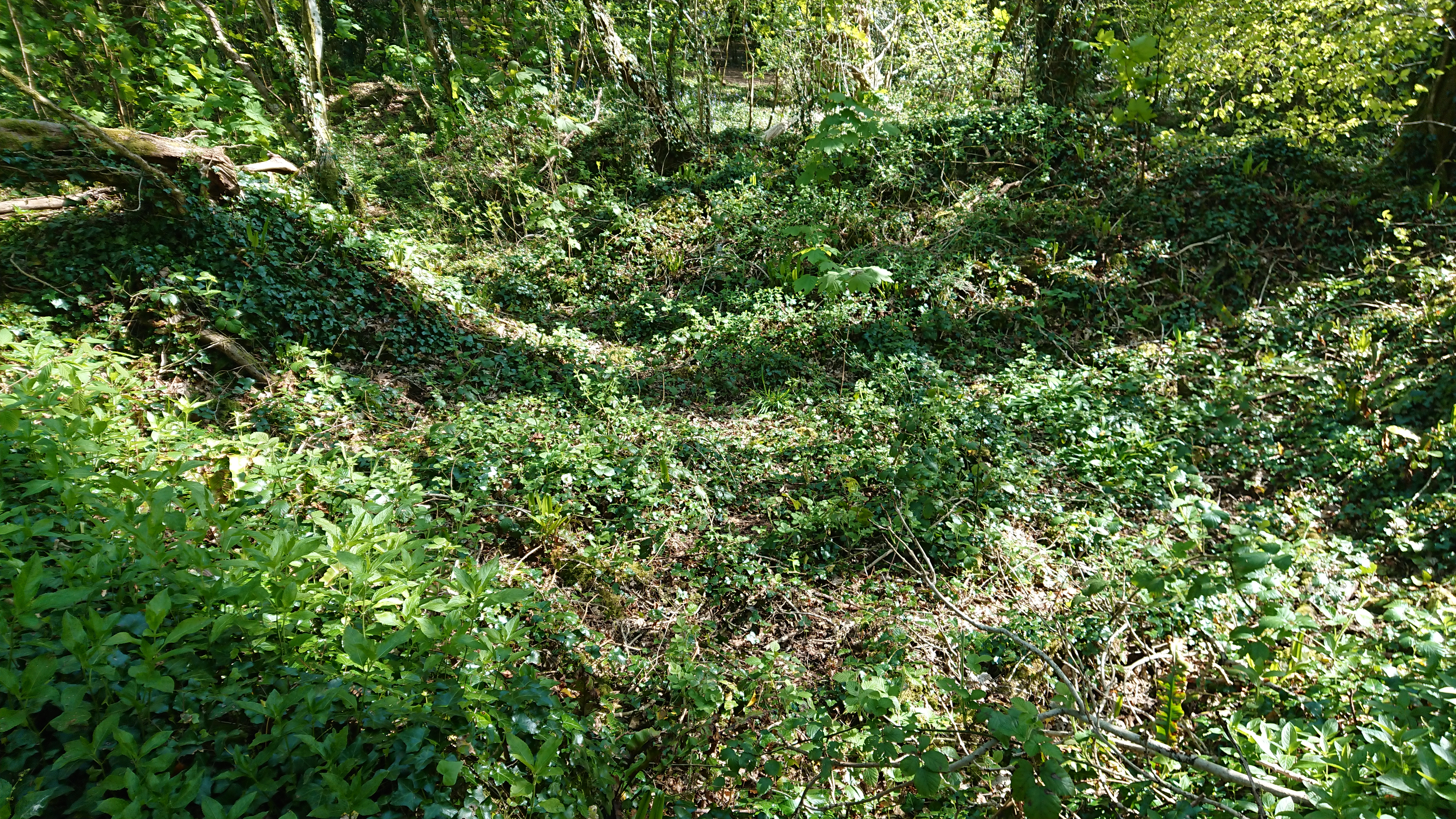 I wondered on Twitter how old they were, what the people who lived in them did for a living, and when the Record Office would be open again.

@DrIestynJones  pointed me in the direction of http://geoarch.co.uk/reports/1999-06%20Wenallt520slags.pdf which is a report on some early ironworking slag and other remains further down the Cwmnofydd. I don’t think the cottages were that old – but where there was medieval ironworking there may have been post-medieval working as well.

Several people pointed me to online maps, including @MusicNLW  who led me to the National Library of Wales’s amazing Places of Wales site https://places.library.wales/ . You need a place name to get in but once you are there you can scroll around, look at the 1840 (ish) tithe plans, an old OS map (2nd edition, I think, early C20) and the modern map (Google not OS, alas, so not brilliant for anything off road). Then you can pull up data from the tithe surveys – field names, crops, tenants and owners. It can be tricky tying up early C20 trackways with modern rights of way but it’s doable.

A bit of work on that suggested that my first batch of photos was not a row of cottages but a whole little farm, Cwmnofydd (about grid ref ST 14702 83939). It was there on the early C20 map and presumably occupied – one wonders when it was deserted and how it became so completely derelict. There are other lost farms in the area – Cefncarnau Fawr, up on the ridge to the north, around ST 15053 84409, was a big farm complex with a massive barn and other outbuildings 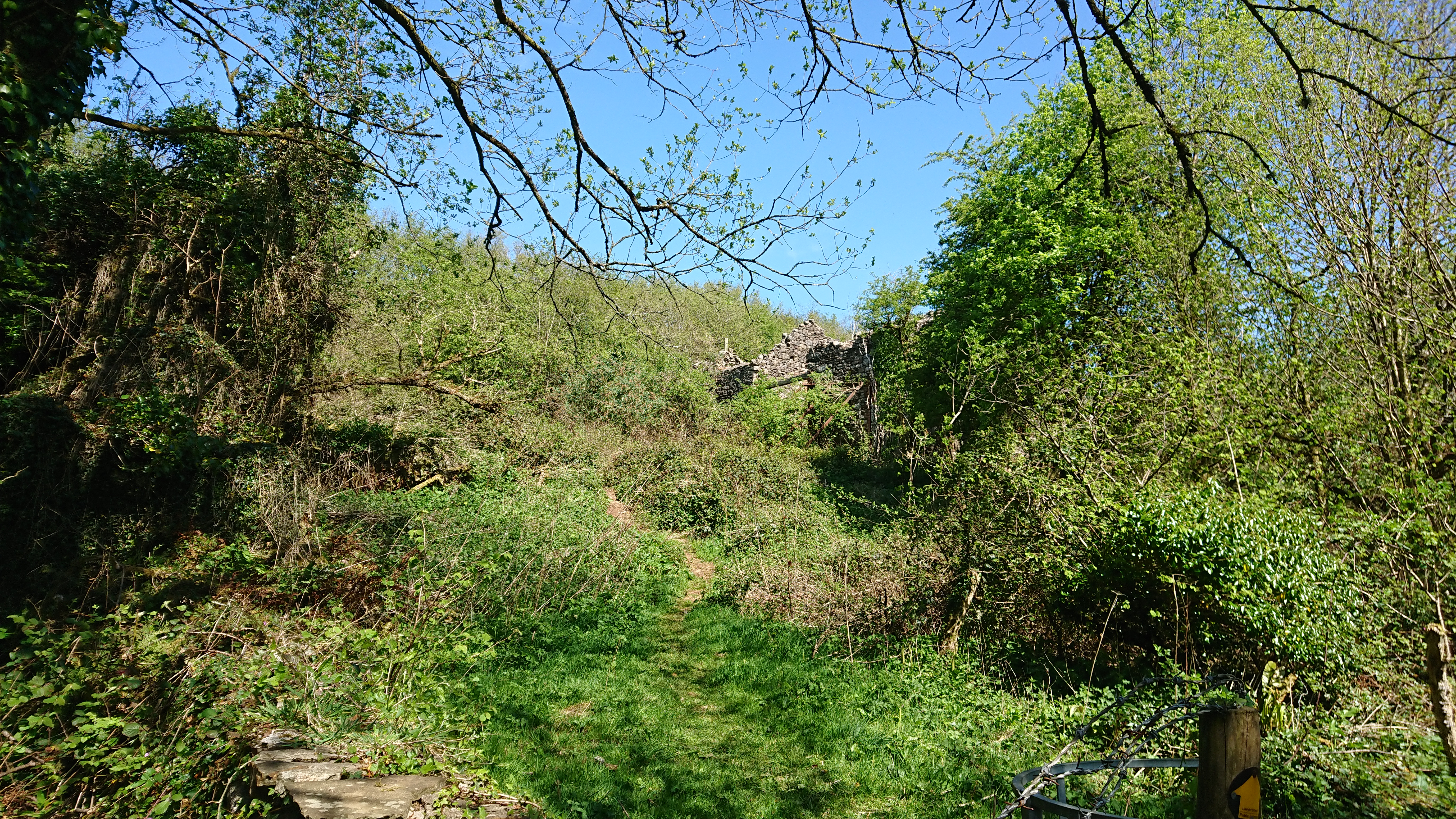 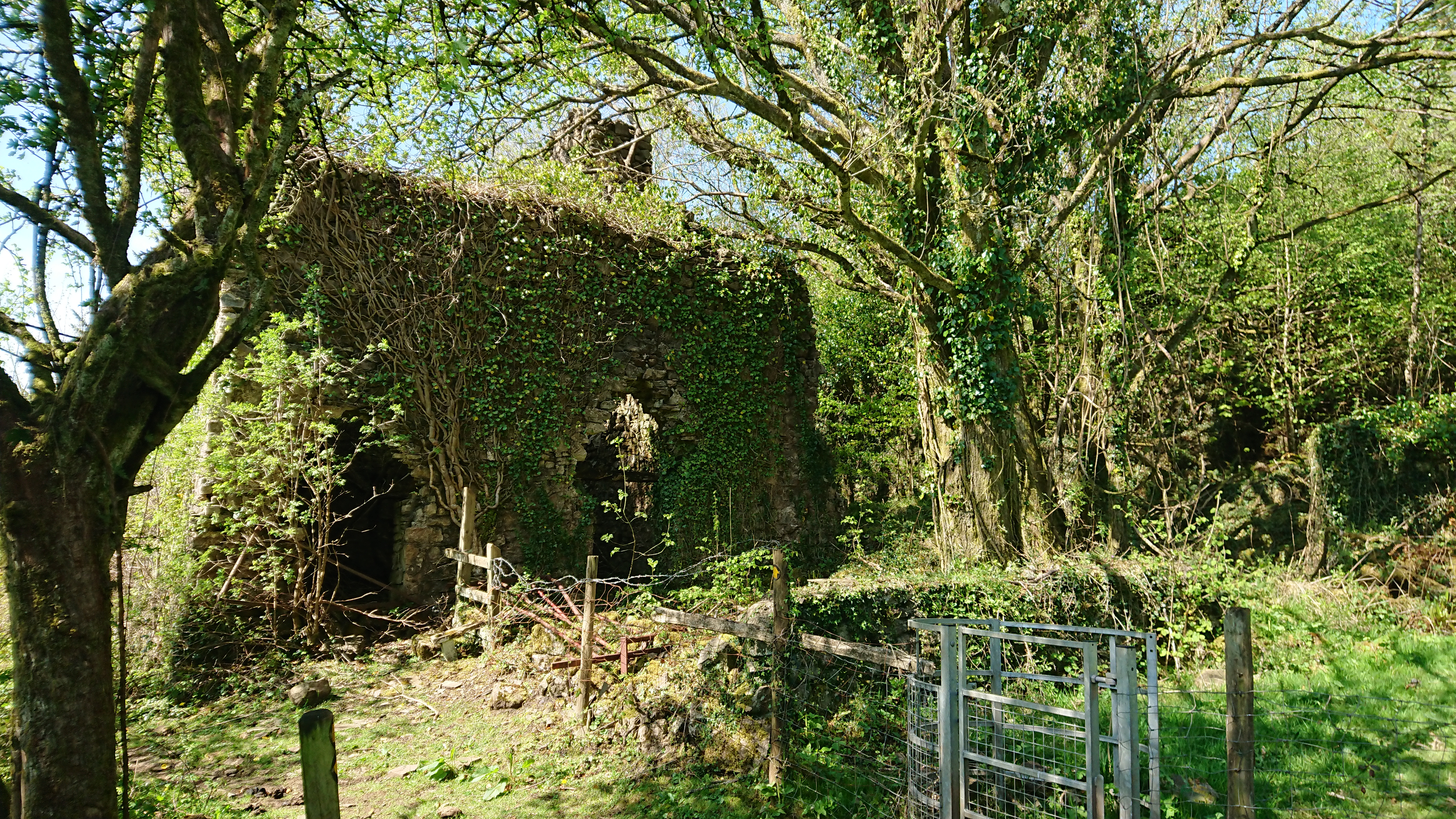 but that too is completely lost.

Walking a bit further with Nell the spaniel got me to the other side of the main road over Caerphilly Mountain and along the lane to the Heol Hir. Here the trees were cleared a couple of years ago and you could see the foundations of another little farm at ST 16943 84871 (easier to see just after the trees were cleared) 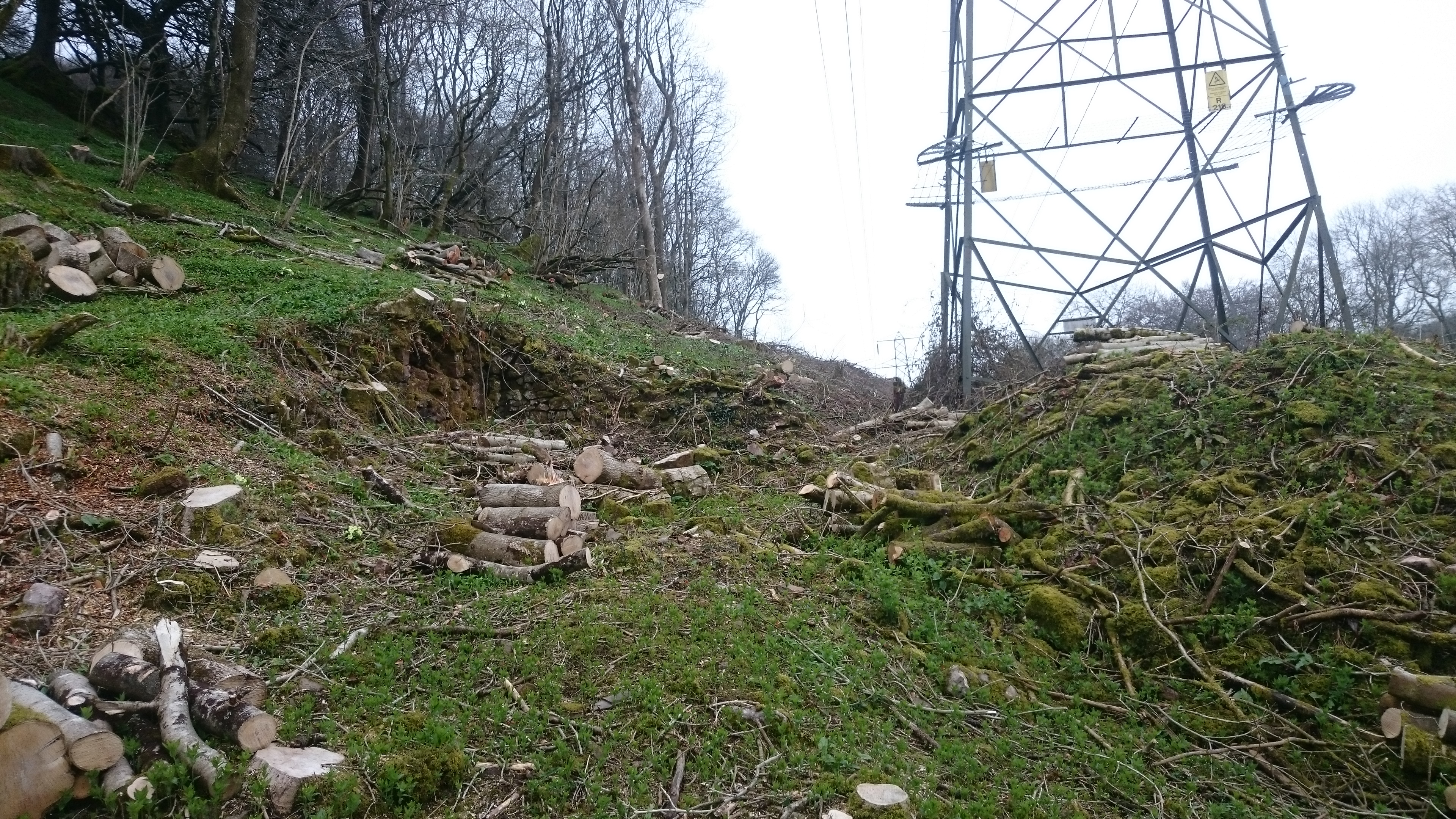 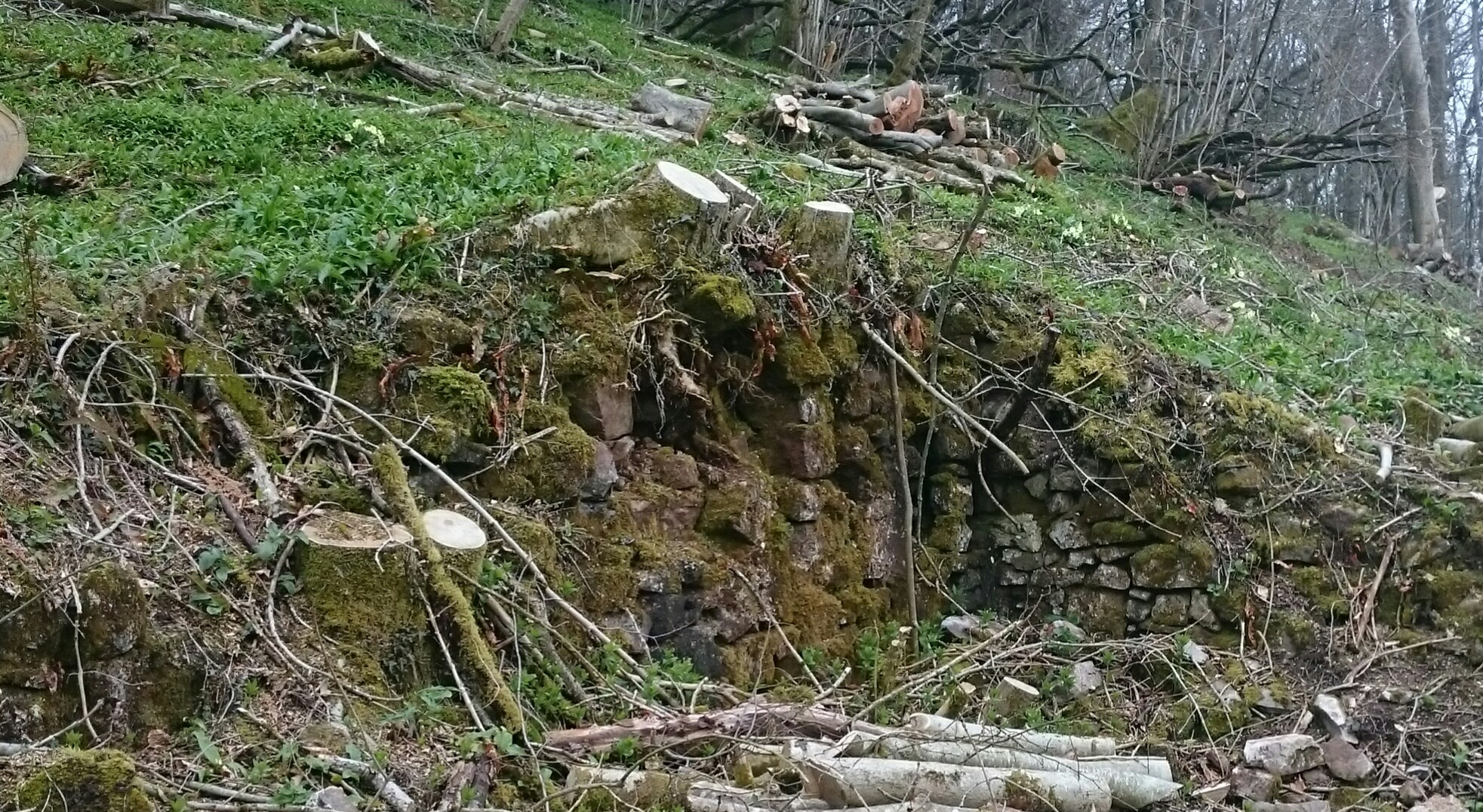 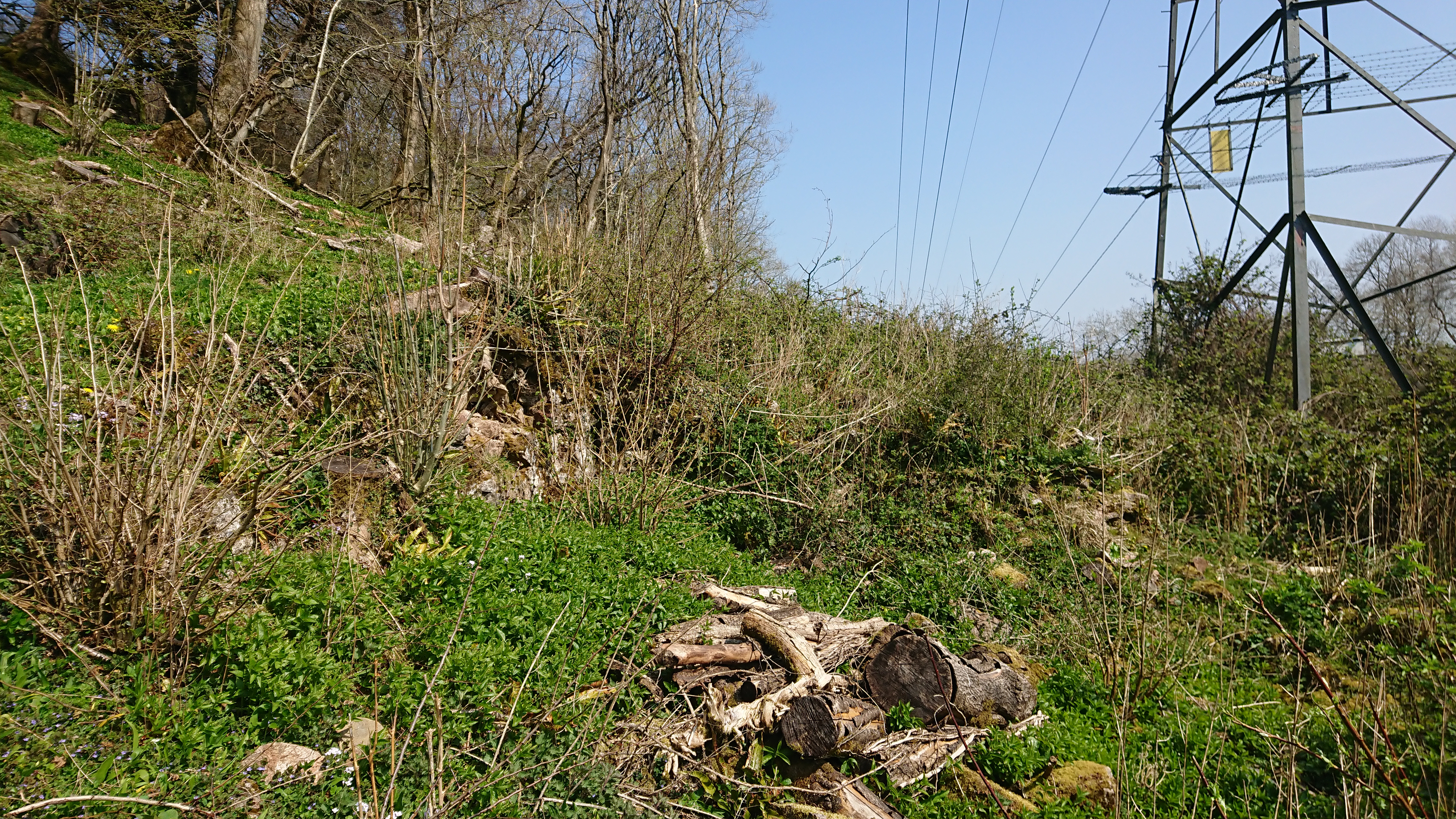 I found this one on the 1840 plan – I thought in the original posting that it was Bwlch-y-Gelli but it’s actually Bwlch-y-Llechfaen so I’ve corrected it (a bit difficult to identify as we were on the edge of 2 plans and they didn’t quite match up). That too was still there in the early C20 but it’s now just a little bit of tumbled stone under the brambles.

It’s often surprising how quickly a building can degenerate into a ruin. This is Penybryn Cottage, on the road between the Black Cock and Rhiwbina Hill at about ST 14293 84426. 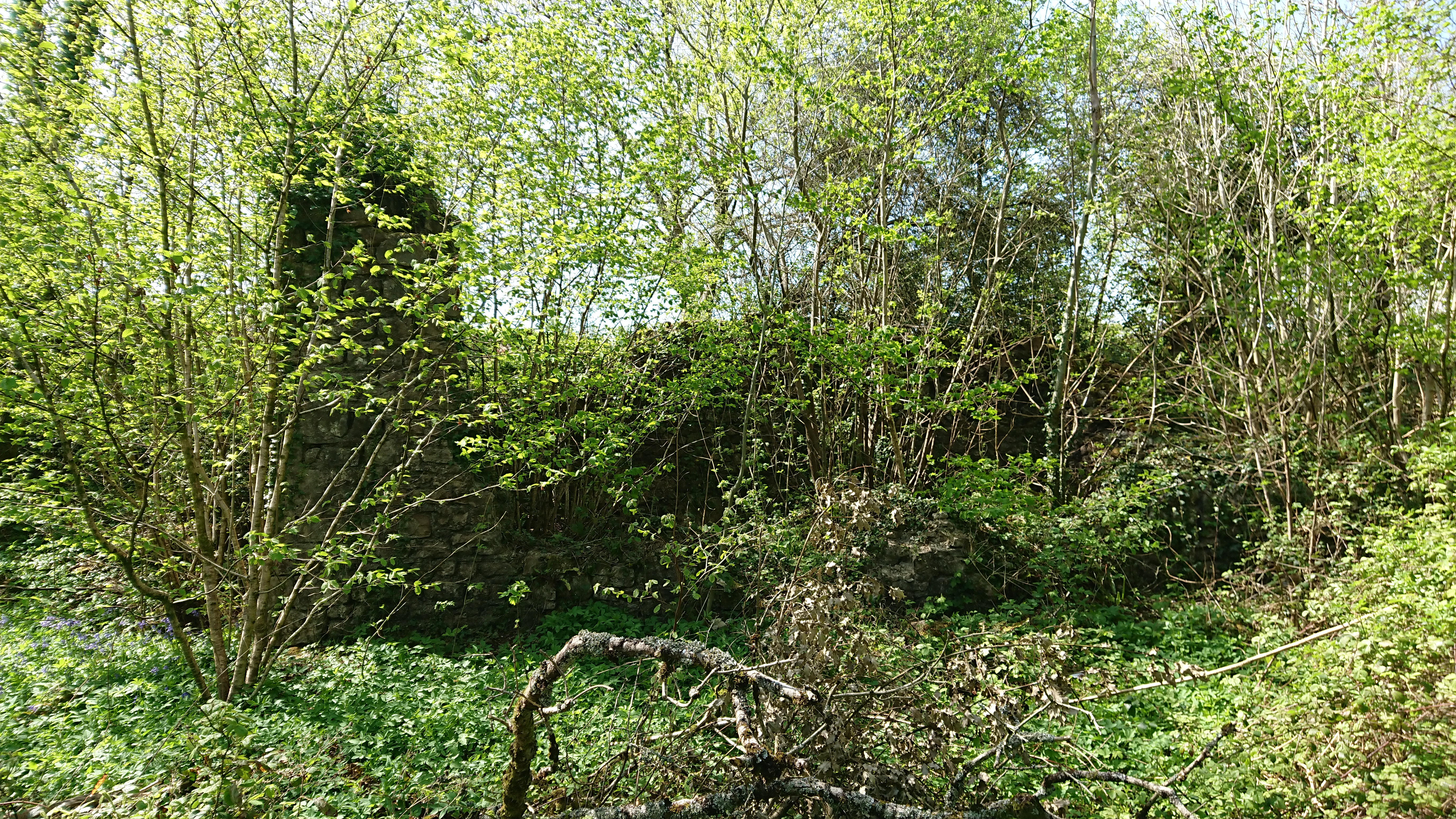 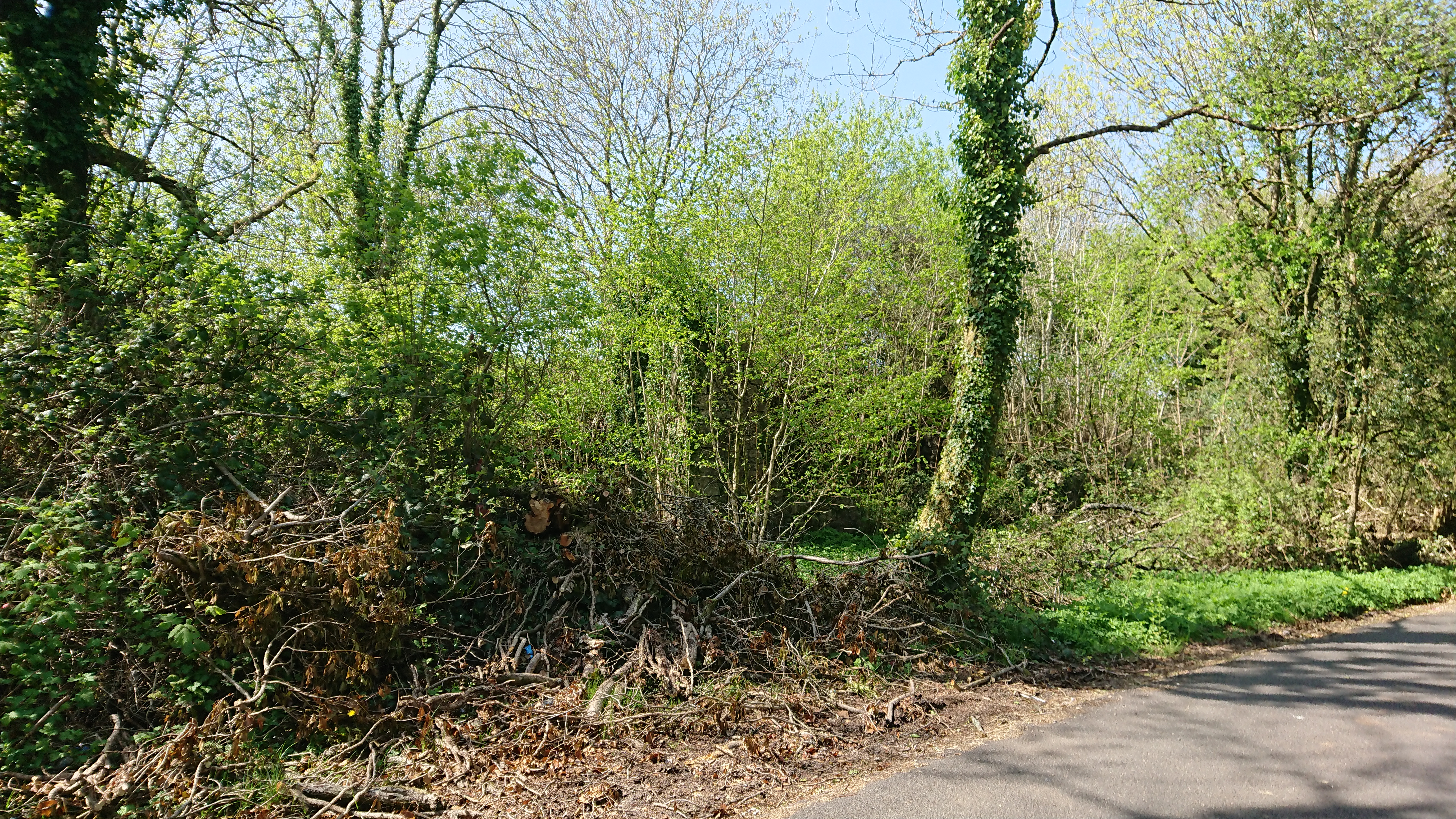 My father-in-law remembered it in the 1930s or 1940s with a huge family living in it. Once the roof goes, the whole building goes.

Penybryn Cottage is on the map but I couldn’t find this one, 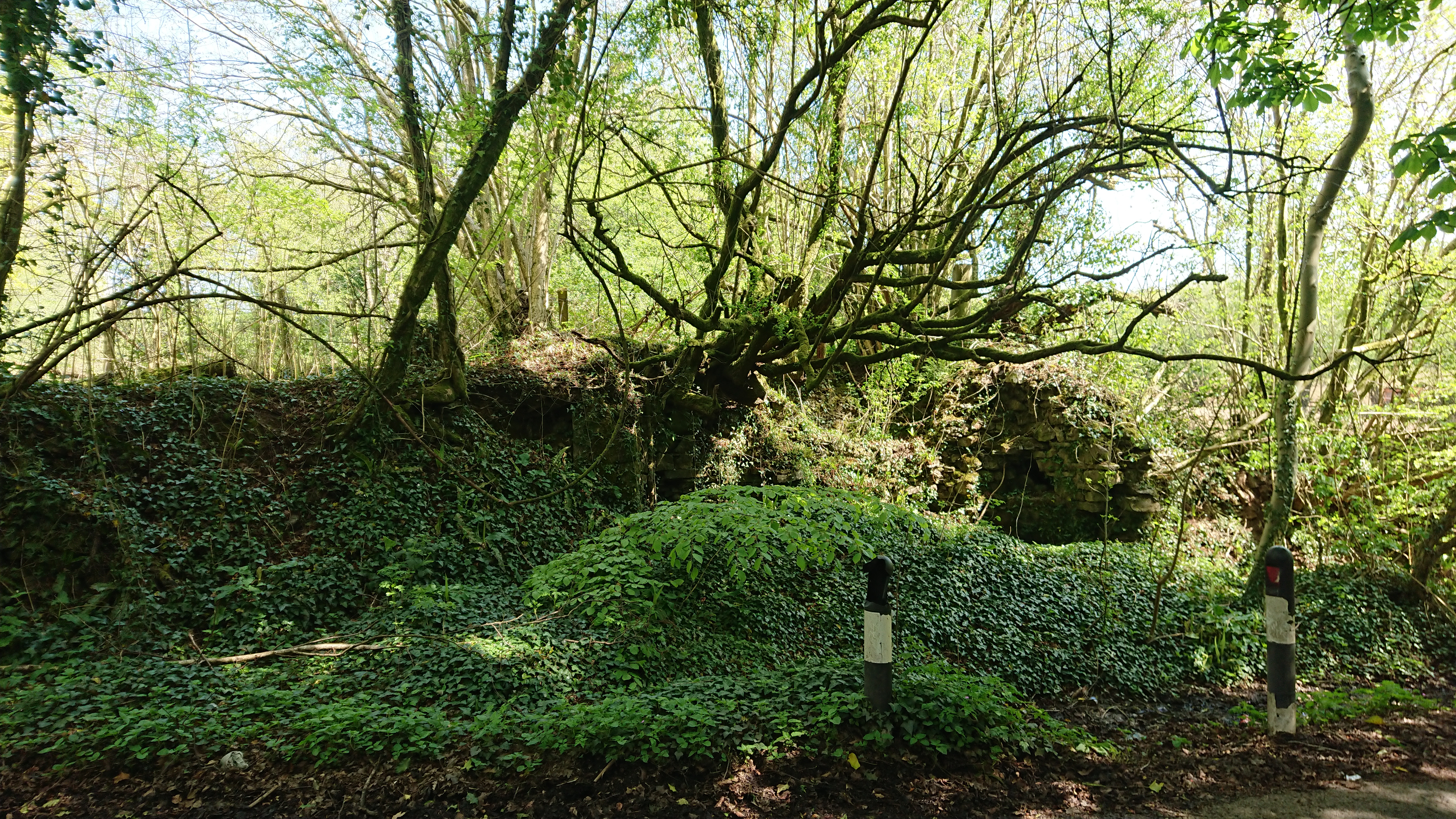 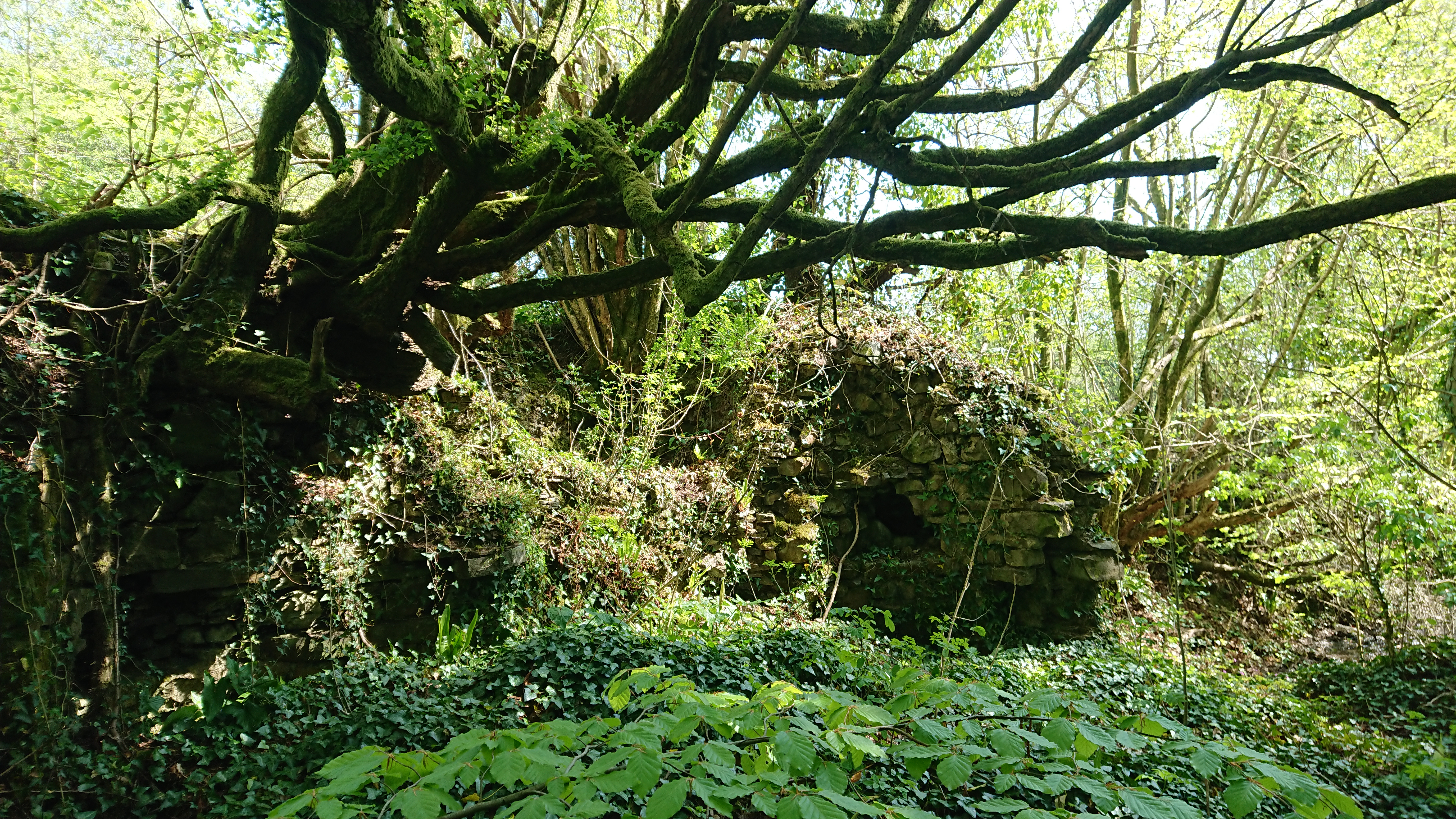 across the road and a bit further uphill. Quite a substantial building, with its own bread oven.

There are others that aren’t on the map. A traditional platform house near the top of Castell Coch woods, round about ST 14009 83746: 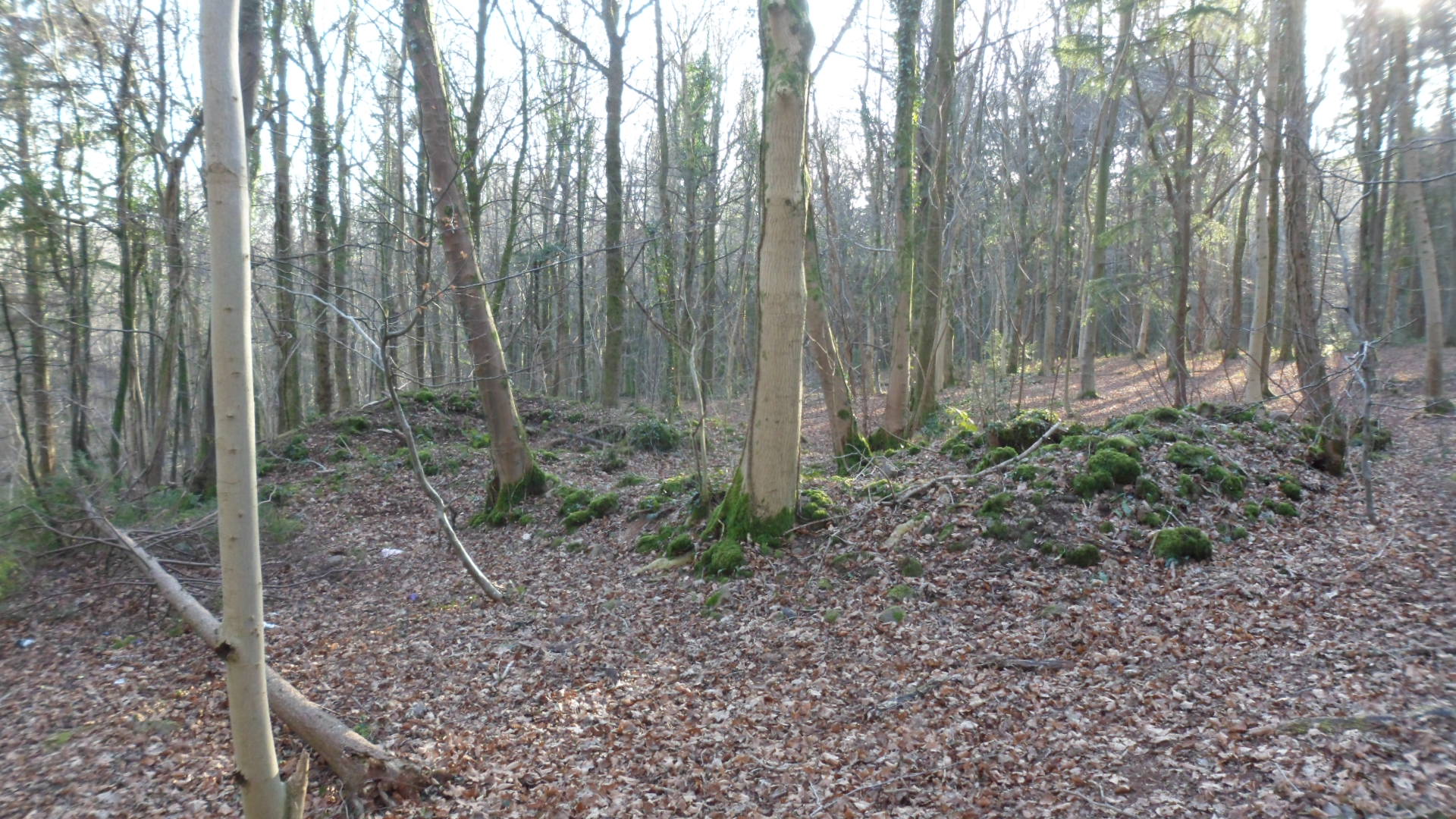 and some ‘structures’ around the iron-mining pits, a little further into the woods, round ST 13876 83545 (these grid references are a bit vague). 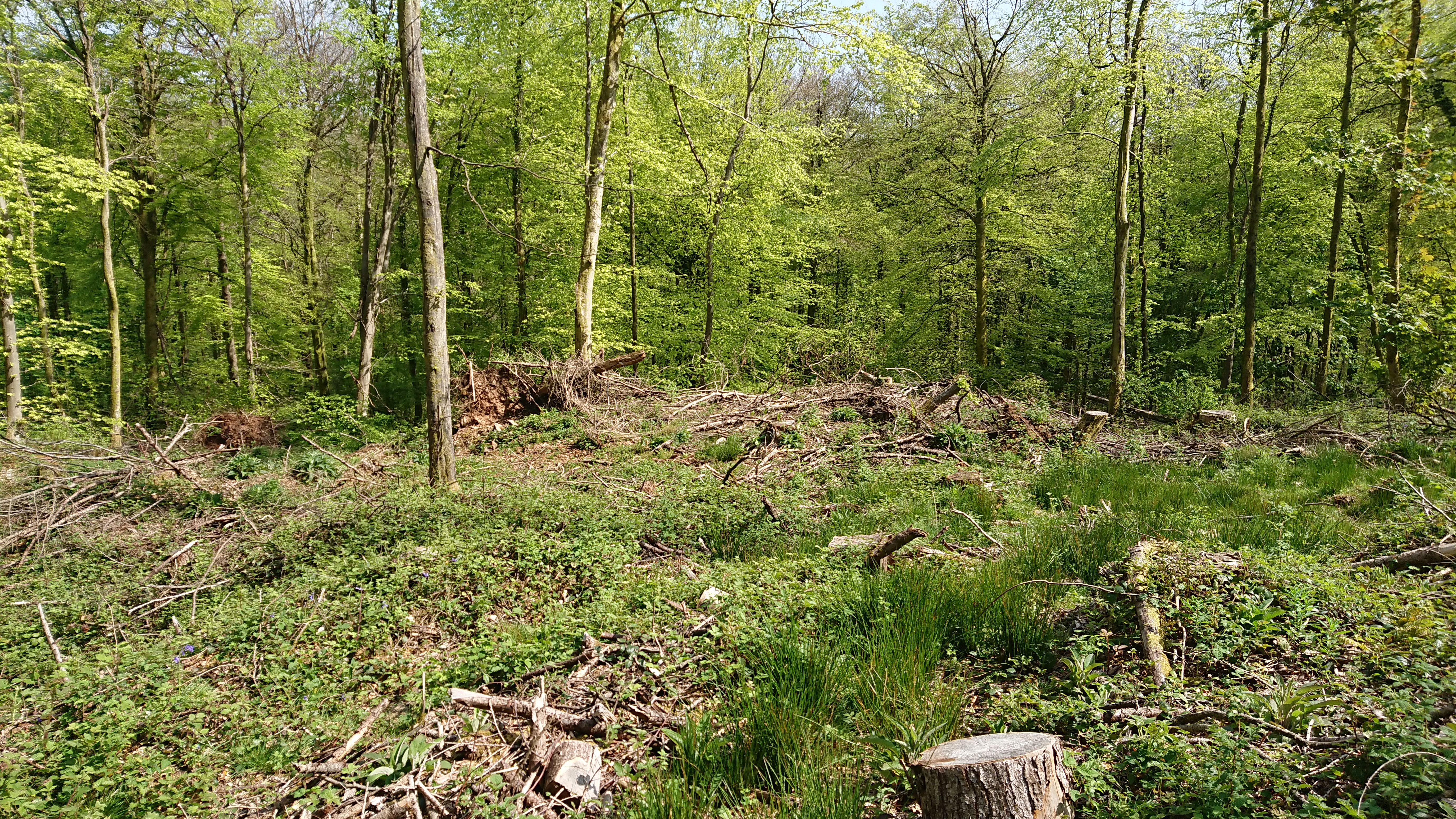 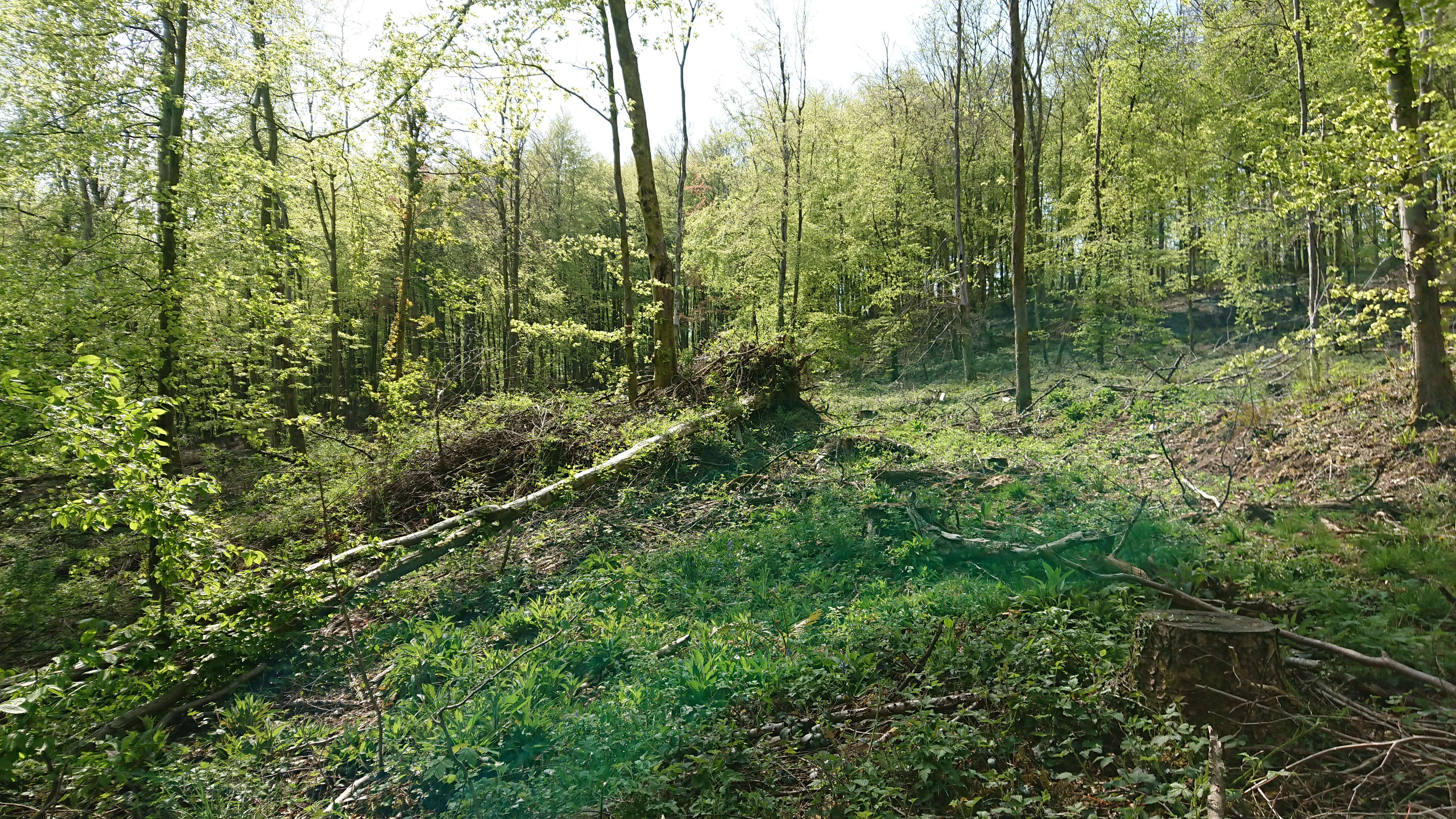 These might just be spoil heaps from the iron mines but this one looks rather rectangular. (It was actually easier to see before the trees were felled.) Probably not a house either, though – somethig to do with the iron mining? The whole area is pockmarked with diggings for haematite iron ore, 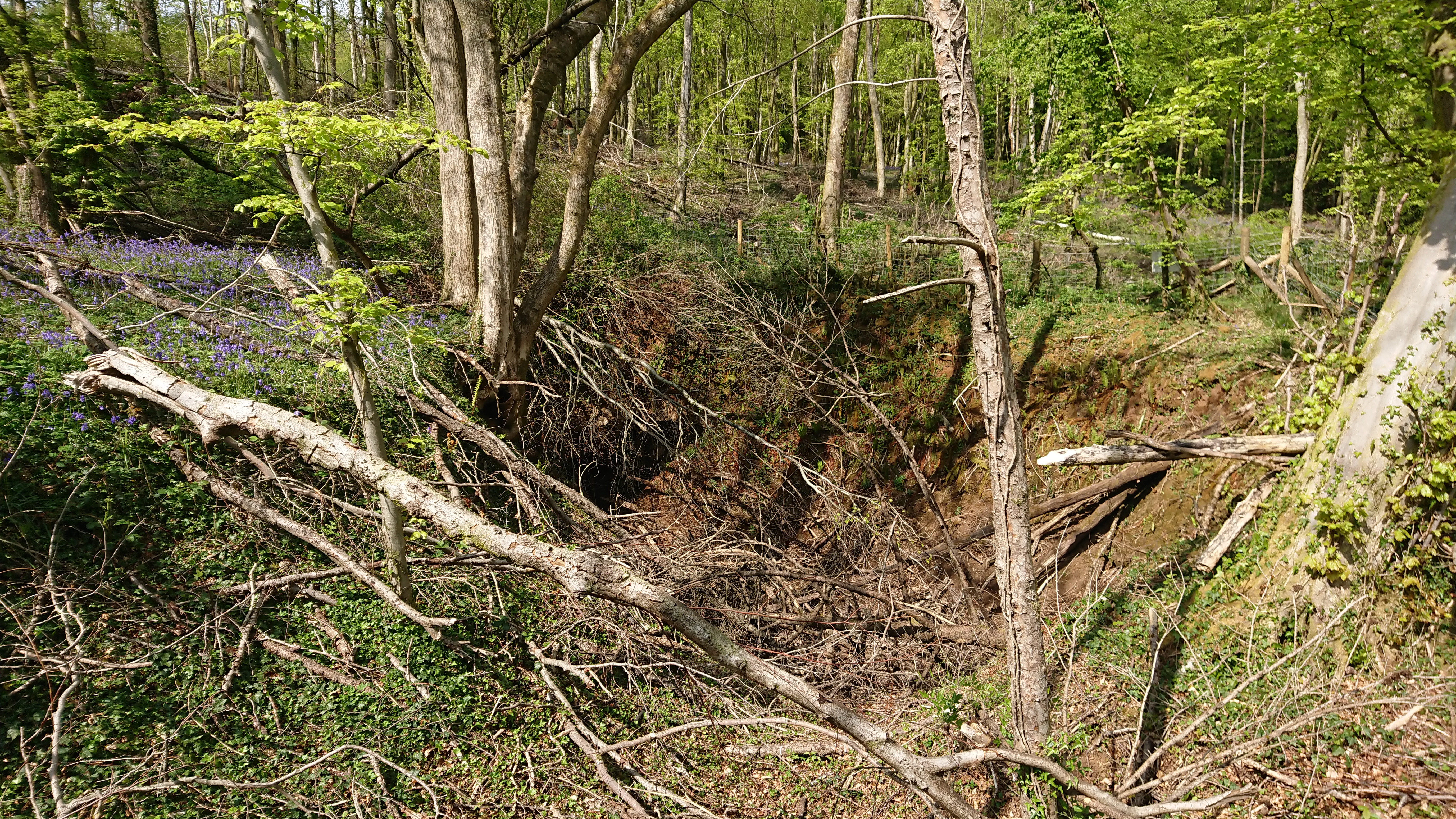 some of it probably 16th and 17th century.

When Natural Resources Wales were preparing to fell the conifers on this side of the forest because of the dreaded phytophthora ramorum, they said they had a detailed survey of things like the iron pits and possible charcoal burning platforms, something like a Lidar survey. I wonder if it’s ever going to be publicly available?

And I must remember that @AncientTorfaen  wanted to know what colour the mortars in the old houses were. 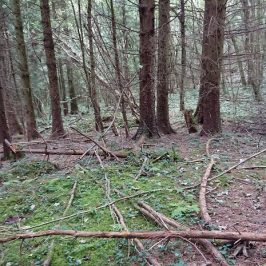 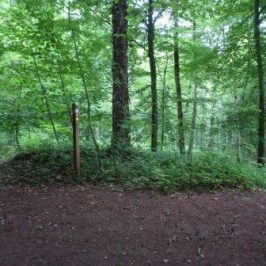 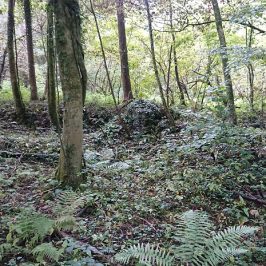